“Yorkshire-based singer-songwriter Boo Sutcliffe has drunk deeply at the well of Americana on his debut album, Blink. But under the surface of the songs, other influences are lurking – the indie pop of Del Amitri or Travis, Mark Knopfler’s blend of English rock and Nashville country, folk-tinged singer-songwriters… any of these can hove into view momentarily, adding a distinctive personal touch to the arrangements.

“Throughout, however, Sutcliffe’s voice and intelligent lyrics bring the disparate parts together to create an enjoyable listening experience. The songs may have placed themselves firmly in Radio Two territory but are none the worse for that. Creating engaging songs that repay repeated listening is a skill well worth your attention.

“There’s a smoothly polished surface to numbers like ‘Meet Me In…’, ‘Running Man’ and the title track that is easy on the ear. However, there’s a subtly and depth to the lyrics, whether in storytelling mode or musing on the frailties of desire and relationships. Other songs, like ‘Promises’, up the country flavour but layer-on 60s jangle-pop influences, which avoids the risk of lapsing into cliché. Overall, a thoroughly enjoyable opening from an artist worth watching.” 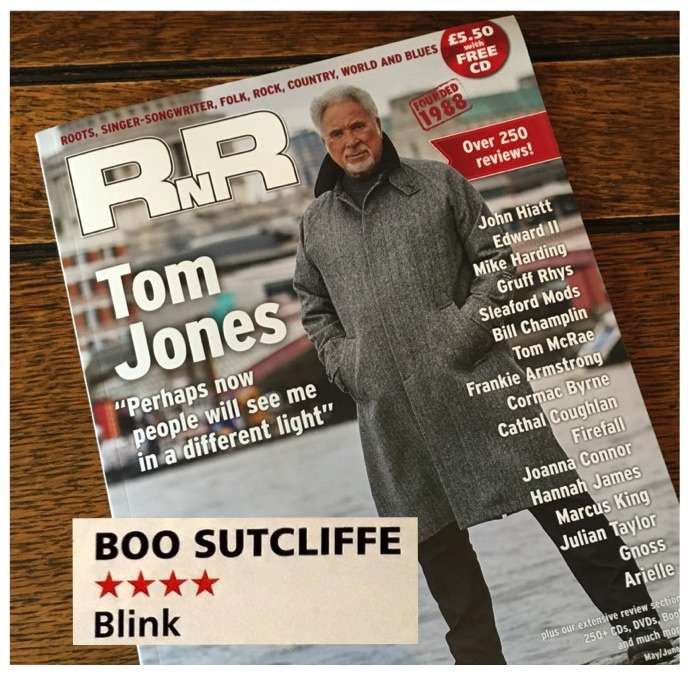 “What a great surprise! A cracker of an album on continuous repeat in the car… From the opener ‘Meet Me In…’ to the closing ‘Blink’, this will grab you. Sounding like a classic from the start… ‘Letter To My Younger Self’ ,’Impervious’ and ‘Almost Done’ are beauties. Paddy McAloon or Roddy Frame would be proud of these songs. Boo Sutcliffe has made a gorgeous album.”

“Accomplished, beautifully crafted songs by a performer so obviously in love with the art of songwriting. Blink – and Boo – deserve a much wider audience.”

“Boo’s album Blink, should not be missed, full of great tracks blessed by Boo’s superb easy listening vocals. My favourite track Almost Done made my Record of the Week selection recently on my radio show. Simply brilliant.”

“In other news, Boo Sutcliffe’s new record, Blink, is astonishing. The art of songwriting is very much alive and in fantastically good health. If I had to pick two introductory listens to give a taste of the album, they would be the opening track, ‘Meet Me In…’, a witty and cleverly written song that travels around the world with intelligent wordplay and flawless musical backing, and ‘Letter to My Younger Self’, another track that puts an emphasis on strong and captivating songwriting whilst also conveying a brilliant Americana folk undertone. This album is amazingly Sutcliffe’s debut. Amazingly because he sounds like he is a seasoned storyteller that should already have dozens of masterpieces under his belt. I suppose this is the outcome of self-funded but passionate musicians. Please check it out today to ensure that there are many more Boo Sutcliffe records to come. Thank you!”

link to the original article

Daz in the Hat Radio

“Blink is full of amazing tracks, every one a gem!”

“Boo Sutcliffe’s new album ‘Blink’ is an inspiration. Boo has an excellent subtlety to make each track different and has a unique sound. Boo Sutcliffe is on the way to being an inspirational music artist of the day. I look forward to hearing more tracks from him in the future.”

“Fuelled by a renewed and reinvigorated interest in songwriting, the Huddersfield-based singer songwriter describes himself as a ‘recovering drummer’ and now takes centre stage to deliver his own self-penned songs, drawing from innumerable influences. Brought up on a diet of pop records from the collections of his two brothers, together with older standards from his mum’s LPs, Boo mixes all this up into a new and personal whole, the result sounding not unlike a hybrid of Neil Diamond and Willie Nelson with the Goo Goo Dolls behind them. Unafraid to share the spotlight, Boo invites singer Ruth Bostock to join him for “Running Man”, while also bringing in further assistance from bassists Corey Clough-Howard, Paul Heckingbottom and Paul Melleney, with guitarist Roger Kinder and harmonica player Jason Kerry helping to make “Promises” such an infectious pop tune. If the opener “Meet Me In…” employs the lush string arrangements of Andy Wright, then the closing title track brings it all around full circle, this time with a steadily building chorus of voices, effectively book ending a bunch of songs that offer but a glimpse at this promising talent.”

link to the original article