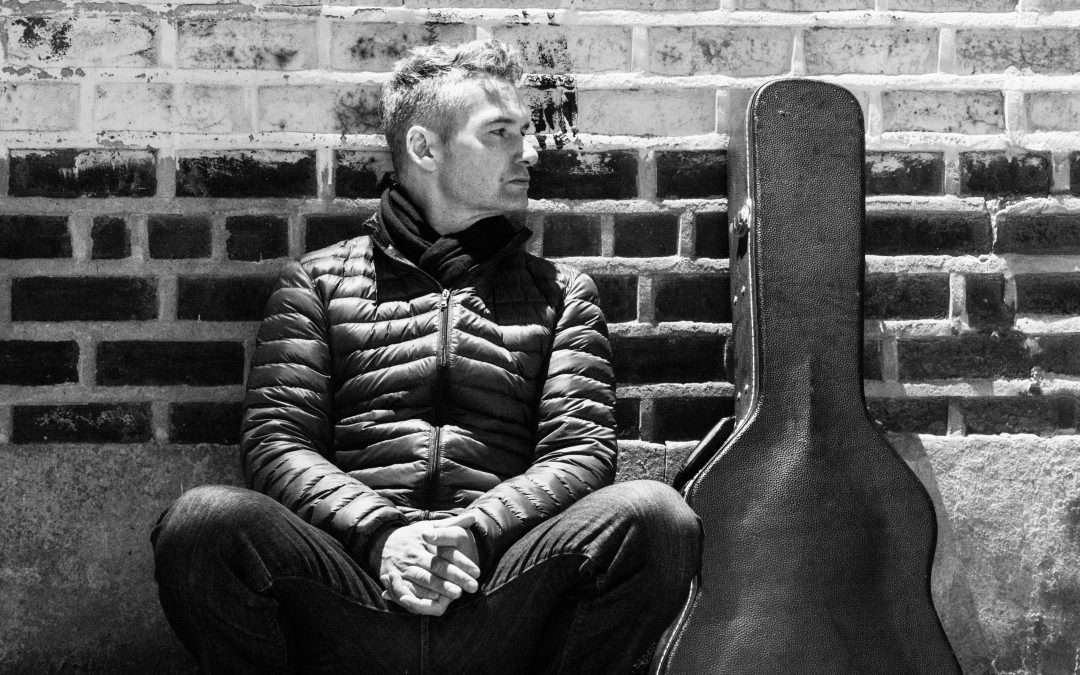 See the original interview on The Sound Cafe website.

The Sound Cafe, based in Ontario, Canada, is the magazine of Blues and Roots Radio, which broadcasts over 50 shows from passionate, music loving DJs around the world.

English singer-songwriter Boo Sutcliffe talks about playing Space Invaders with indie pioneers, finding his own voice, and the importance of going to parties

What is your “backstory”?

Mine is not so much a “backstory” as a “backside” story; it involves a lot of me sitting around on my arse feeling sorry for myself, although I did get off to a flying start.

I was a precocious kid. The family drum kit arrived when I was ten and my own guitar a year or so later. I was playing in bands at twelve, gigging in bars and clubs at 14, and pretty much disillusioned with everything by the time I hit university. At 18, I stupidly thought I’d already done everything and largely opted out of life for what became a couple of decades. I had the idea that I was a musician and that I was biding my time slowly crafting ideas for songs. But I never quite finished one.

All the while, I believed I couldn’t sing because it generally sounded pretty awful when I joined in with my favourite pop records. What I didn’t realise was that most of them were just in the wrong key for me. I have quite a low voice (a baritone) and most male pop singers sing high tenor, so I was trying to squeak along to melodies I couldn’t get anywhere near. Until, that is, I started jamming with Gary, a very affable guy I’d met at various parties over the years. He had the patience to guide me to the right keys for my voice and suddenly the impossible became do-able. It was a revelation. I’m not saying I miraculously became the greatest singer anyone ever heard, but there was a bit of a voice coming through, a new-found confidence and definitely something to work on.

It was a chance encounter at another party that helped me take things a step further. I bumped into Roger, an old band-mate from my teenage years whom I hadn’t seen for years, and he invited me to his home-studio to record a song. So, rather than looking like a loser to this respected local musician, I just got myself into gear and finished a song that I’d been toying with for years. Then I finished another, and another and so it went on.

The moral is, if all else fails, get yourself invited to a lot of parties.

What are some of the most interesting or exciting projects you are working on now?

It was a big deal getting my debut album together last year – recording and producing everything at home and working remotely with professional engineers – so I’m taking a little bit of time to indulge myself with a couple of short jaunts outside my comfort zone. I’ve always loved the great jazz singers and although I’ve had brief dalliances with crooning, I’ve never recorded anything. I’m lucky to know quite a few musicians from disciplines very different to my own and I’ve enlisted the help of an opera singer friend for a “lockdown” duet of a fabulous Gershwin tune, and a classical pianist who’s going to accompany me on a late-night smokey classic made famous by Frank Sinatra. Neither of these are for release but I’m sure they’ll find their way onto social media.

Away from the jazz standards, I’m demo-ing songs that will hopefully morph into an EP to be released later this year. This is a really interesting part of the process because I get to try lots of different things out. Although the songs are written, I never quite know where a song’s going to take me until I start experimenting. There’s a track on Blink that was written as quite a fragile indie acoustic number, which I then decided absolutely had to be a solo piano and vocal number, before eventually recording it in a kind of garage band style with lots of drums and guitars. It’s good to try things out.

Who are some of the most ‘famous’ people you have interacted with? What was that like?

Long before I struck out on my own as a musician, I worked for a promotion company in Huddersfield, Yorkshire. We put on some great gigs back in the 90s, but the best band that ever stepped onto our stage wasn’t a headliner but a young support act out of Oxfordshire. They were polite, intelligent young men and they chatted and laughed about music, books and trivia. They were a tight-knit unit and they all huddled together around an old space invaders machine in a corner of the venue, so I huddled with them for a while.

I’d heard their debut EP and it was obvious they were quite something, but I wasn’t prepared for just how “very special” they were. As they finished their final song, I remember scanning the venue from the side of the stage and everyone, to a man and woman, looked awestruck. I scraped my jaw up off the floor and went off to pay their tour manager the standard £50 support fee.

As they left the venue, the lead singer turned to me and said: “see you again mate”. I don’t doubt that he meant it, but he must have been the only person in the venue that night who didn’t know with absolute certainty that their future lay somewhere altogether different to support slots in Huddersfield on a rainy Tuesday night.

A month or two later, I saw them on Top of the Pops (the UK’s flagship pop shop) and within a couple of years, Radiohead were one of the biggest and most influential bands on the planet. I think I can safely say, that’s the best £50 I ever spent.

Years later, my first support slot as a singer-songwriter was opening for Dan Reed (of Dan Reed Network). He was playing an intimate solo show at Guiseley Theatre, a gorgeous old-fashioned venue near Leeds. It was pretty daunting for me because Dan Reed had toured the world with The Stones and Bon Jovi, and shared the bill with the likes of Queen and Bowie, while I, frankly, had done nothing. When he turned up though, he was gentility personified, bantering and having a laugh with promoter Darren, my guitarist Roger, bass player Paul and me. He even gave up his dressing room for us, saying he really didn’t need it and there were more of us.

When we finished our set and walked backstage, there was Dan with a big smile on his face; he said some very nice things, then proceeded to sing his favourite verse from our set back to us. So here was a bona fide rock star singing one of my songs to me:

“Meet me in Beijing, ‘cause this is the thing,
I’ve seen the future, and I think it might suit ya”.

He even invited me to open for him at the next gig on his tour. A class act.

Which people in history inspire you the most and why?

Regardless of the medium, I’m a sucker for a good artist – especially those with the courage to push the boundaries and challenge the orthodox, while retaining enough accessibility to ensure people pay attention to what they’re doing. So whether it’s Beethoven, Louis Armstrong or John Coltrane, Da Vinci, Rembrandt or Picasso, I think all aspiring artists owe a debt to those who laid it all on the line to help redefine what seems possible. If I had to pick one though, it would have to be a writer; it would have to be Tolstoy. For me, more than any novelist, poet, lyricist, philosopher, journalist, prophet or social thinker, Tolstoy understood why people are like they are, why we do what we do and think what we think, and how our inconsistencies and foibles are the beating heart of our humanity.

What would be your advice to an aspiring artist?

When I started performing solo, and then fronting my own band, I’d say to myself before every gig: the worst that can happen is that you’re going to learn something. This uncharacteristically positive attitude helped me a lot. Be nervous – it’s normal to be nervous – but try to channel those nerves into energy you can use in your performance.

Whatever it is you’re trying to do creatively, the most important thing is simply to do it. You can’t be a writer if you don’t write, or a painter if you don’t paint. Put in the time. Just do it. And rather than wishing you were Nick Cave or Bon Iver, Billie Holiday or Amy Winehouse, try to find your own voice and embrace whatever that turns out to be.

Above all, be brave.

How have you used your success to bring goodness to the world?

Any “success” I’ve tasted is pretty small scale and localized, but I have been lucky enough to play quite a lot of benefit gigs for causes I’m very happy to get behind. I’ve been involved in various events in Yorkshire to raise money for foodbanks, which help people who need it with food and basic living supplies.

It seems incredible to me that in the twenty-first century in a country like England – the so called developed world – we should need charity foodbanks to make sure people don’t go hungry, but need them we do. Festivals such as Marshfest, which is a great event local to me, and benefits organized by the We Shall Overcome movement do a lot to promote awareness and raise cash in this area and it’s been a real pleasure to be involved in them.

What are your “5 things I wish someone had told me when I first started out”?

I was a seriously late developer as a singer and front-man. Although I’d played drums, guitar, bass and keys live as a teenager, I hadn’t performed in public as a singer until five or six years ago. So, while I haven’t done half as much as a lot of singers half my age, I have a lot of experience of not doing something I really wanted to. So my top five pieces of advice to my younger self (and I’ve written a song about it) would be:

We have been blessed with the opportunity to interview and be in touch with some of the biggest names in the music business. Is there a person in the world, whom you would love to have a private breakfast or lunch with, and why? He or she just might see this.

Quite a few of the musicians and artists I admire are, by reputation, quite intimidating souls; I’m not sure how keenly, for example, Tom Waits or Phillip Glass would relish the prospect of being dragged from their beds just to share breakfast with me. So maybe a late lunch, merging into afternoon cocktails might work well, if either of those unique souls were available.

It’s taken me decades to come to love the music of Philip Glass; I think I was always looking for things that aren’t there, rather than just going with it and letting the experience work its magic on me. Tom Waits’ music, on the other hand, hit me full-on, smack between the eyes the first time I heard it. The key thing, I think, would be to talk about just about anything but music.

And if we can push a late lunch a tad further into the early throws of a winter evening, I could definitely enjoy a sundowner or two with Dolly Parton. She always seems so ready to laugh, her intelligence would keep me honest, and her good grace might even keep me the right side of sober.